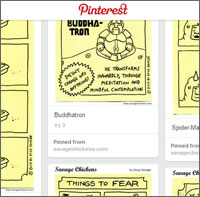 Hmmm I think it’s time for another social media update, because I forgot to tell you that I’ve started posting the daily comics on Pinterest so you can now follow me there.

And I also started a new tumblr for posting other people’s stuff that I like – check it out.

And you can still find me on:
– Instagram – mostly behind-the-scenes sketches and cat photos
– Twitter – random thoughts, retweets, links to the comics
– Tumblr – my original Tumblr where I post my comics and other Savage Chickens stuff
– GoComics – classic strips every weekday (and they have a cool app)
– Facebook – where I swing by and say hello now and then.
– Flickr – more photos
– Google+ – mostly links to comics