Behind the Scenes: Xmas 2007 Edition

Here are a few scraps and doodles from the holiday season. This first one demonstrates the sort of rigorous quality control that goes on here at Savage Chickens: 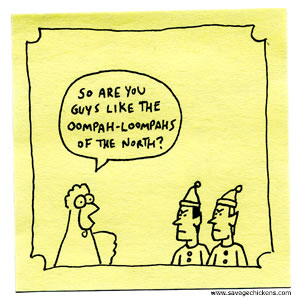 Eagle-eyed Dahl fans will notice that I misspelled ‘oompa-loompa’. I thought about leaving it this way for a second, but then remembered the Tatooine incident, so I re-drew it.

Oh and I added the ‘How to Annoy Elves’ tagline to suggest a stronger sense of malevolence. 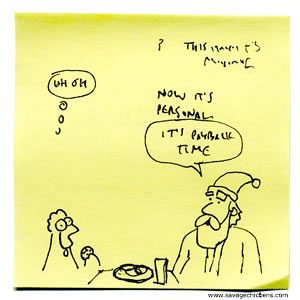 Next, here’s an early scribble that led to the Christmas Revenge cartoon.

The final Chuck Norris version came from this original idea of Santa’s revenge against a cookie thief. I often work through an idea like this, writing alternate dialogs until it feels right.

(This is how my handwriting looks when I write too fast – the bit at the top right is supposed to say “This time, it’s personal”.) 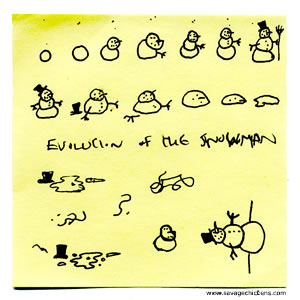 Next, here’s the initial sketch that led to the Evolution of the Snowman cartoon.

I originally had him slowly dissolve, but I prefer the more abrupt melting in the final version. The squiggly marks here are from me making sure my pen still works. 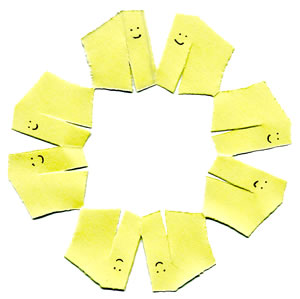 Next, here’s an idea that didn’t make it this year cuz I didn’t get it to work the way I wanted. It came from the idea that Timmy was a bit of a flake and would therefore make a good snowflake. Maybe I’ll try it again next year with one of the giant post-its to see if I can come up with a more elaborate chicken snowflake.

One Response to Behind the Scenes: Xmas 2007 Edition