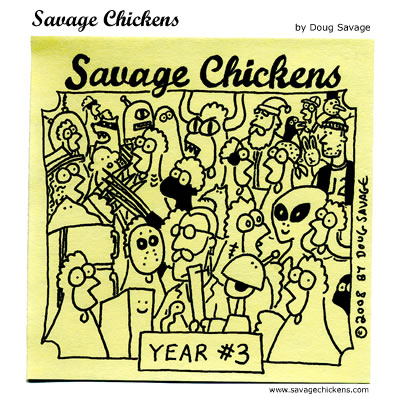 Savage Chickens debuted on the web three years ago today! A big thanks to all of you readers for making it all worthwhile! Today’s sticky note shows all of the characters who appeared in more than one cartoon during the past year.

Here’s your collective top ten. These are the most-visited cartoons from the past year:

Nice ones. But I’ve picked a different batch for my Top Ten. Here they are! (in alphabetical order)

Update! Winners announced! The winners of the coffee mugs (and their favourite cartoons) are…